Hemi t shirts for sale, get your hands on one of our classic drag racing t shirts or hoodies. From a pair of 1964 Dodge/Plymouth A864 cars with wheels up in action, through to our tribute to the 426 hemi engine. Complete with cross ram intake manifold. Celebrating 50 years and everything in between.

Many of our shirts have marketing slogans included on them. Some are also a tribute to famous drag strips of days gone by. Who remebers Lions Drag Strip, or FAMOSO raceway?

With the slogan or often heard radio ad Sunday, Sunday, Sunday. Introducing the big feature match race for the number one spot in the nation. This was usually a match race between well known local racers and an out of town big name guy. 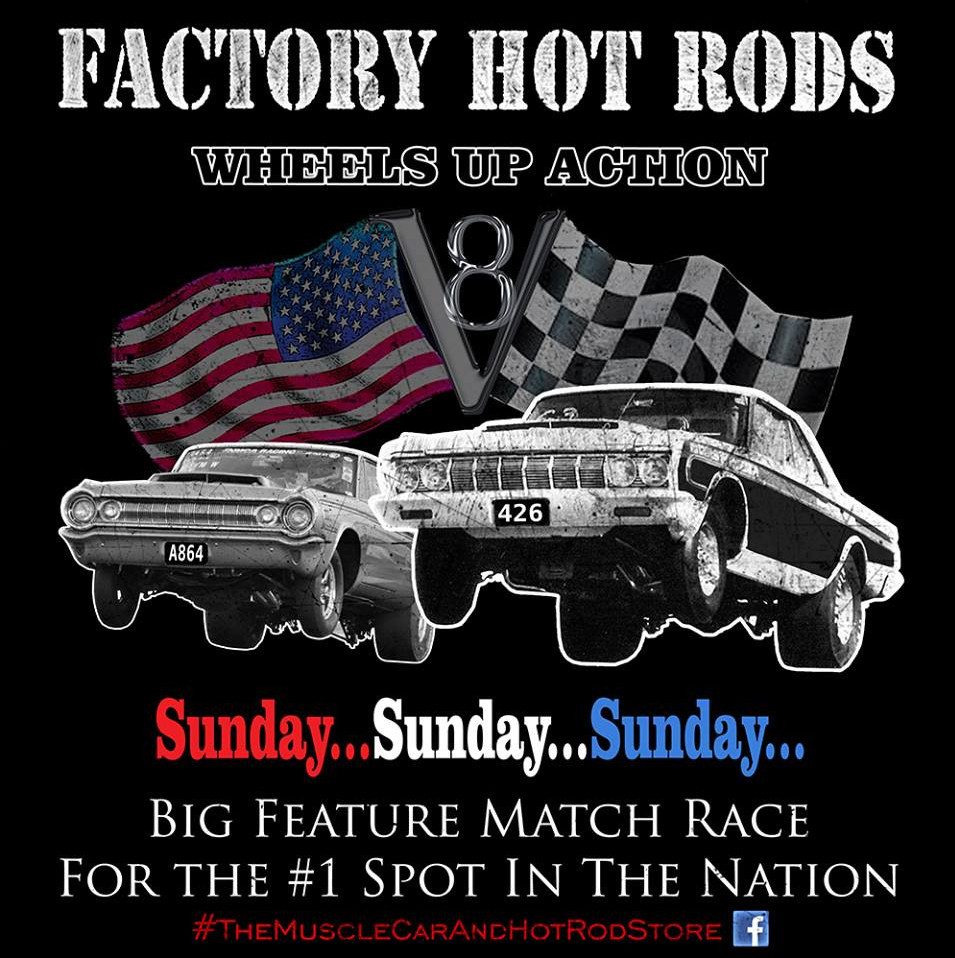 The event was designed to draw in the crowds, as they often did. Jam packed. With a big cash prize for a winner take all best of 3. Thursday nights were often a big night for heads up or match racing too.

Then many racers would race on a Friday night, and then drive 100’s and sometimes 1000’s of miles, to a factory sponsered event held on the Saturday. Same again on Sunday, then home again late Sunday night or early Monday morning.

This was how many racers made an income. Click on the image for more information and free shipping options, or visit the store front at this link https://www.quarter-mile-addiction.com/stores/quartermileaddiction 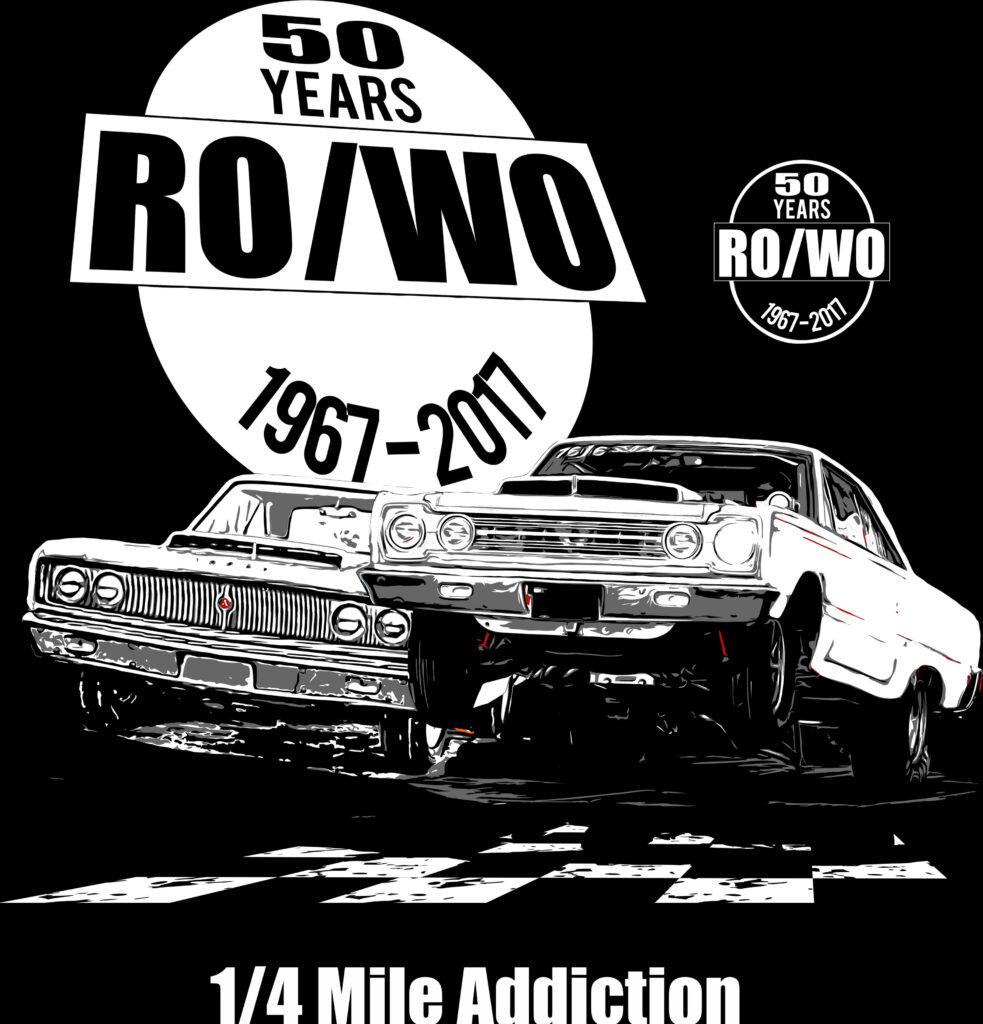 Next up is pair of factory street legal race cars. The 1967 hemi Dodge and Plymouth cars were known by the R0 (Plymouth) and W0 (Dodge) vin tag. Only 55 of each were said to have been made.

They were a little heavier than the factory race cars from previous years. Probably due to the streetable nature of the cars, as they could be registered and driven legally on the street. The cars were largely underrated by racers in the early years due to the extra weight they seemed to have.

Many say that there were more Dodge Coronet and Plymouth Belvedere factory street hemi cars sold in 1967, than any other model year of the 426 hemi production. Perhaps the cars were far more popular with the general public.

After all there was such a massive demand for a street legal hemi car since the hemi engines inception in late 1963/64. Designed purely to win the 19464 NASCAR Daytona 500. And win it did!

Our next hemi t shirt for sale is none other than a pair of 1968 SS/AA cars. An L023 Hemi Dart and a B029 Hemi Barracuda. These cars were built to win IHRA and NHRA super stock drag racing events. 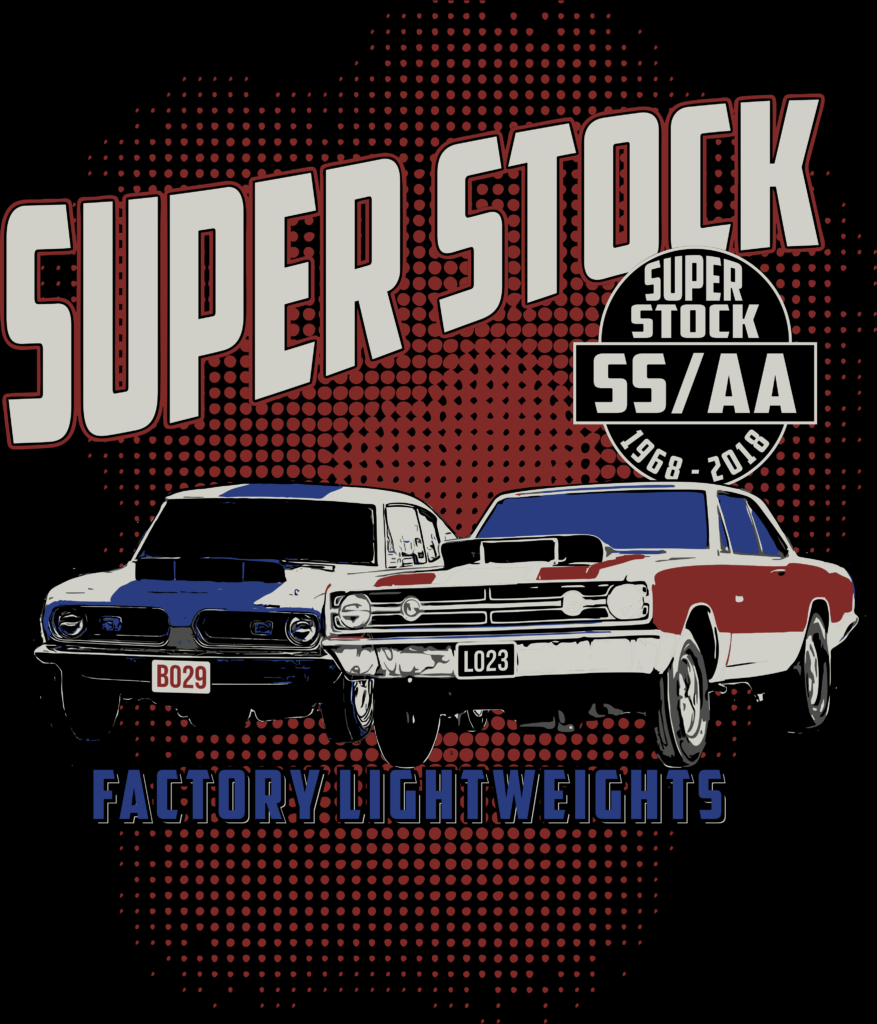 They were by no means street legal although the odd one or two have been known to slip throughthe cracks and somehow were registered to drive on the street. Around 70 of each are thought to have been built.

Many of these cars were acid dipped, an old air craft trick to lighten or thin out the metal/body panels. Fitted with special light weight glass, stripped of any factory sound deadening material, interior trim, window mechanisms etc.

They had fibre glass fenders and hood and anything else that could be lightened was done. These cars dominated their class, to the point where they now run in a class of their own, where some factory survivor and purpose built clones compete with each other to this day. 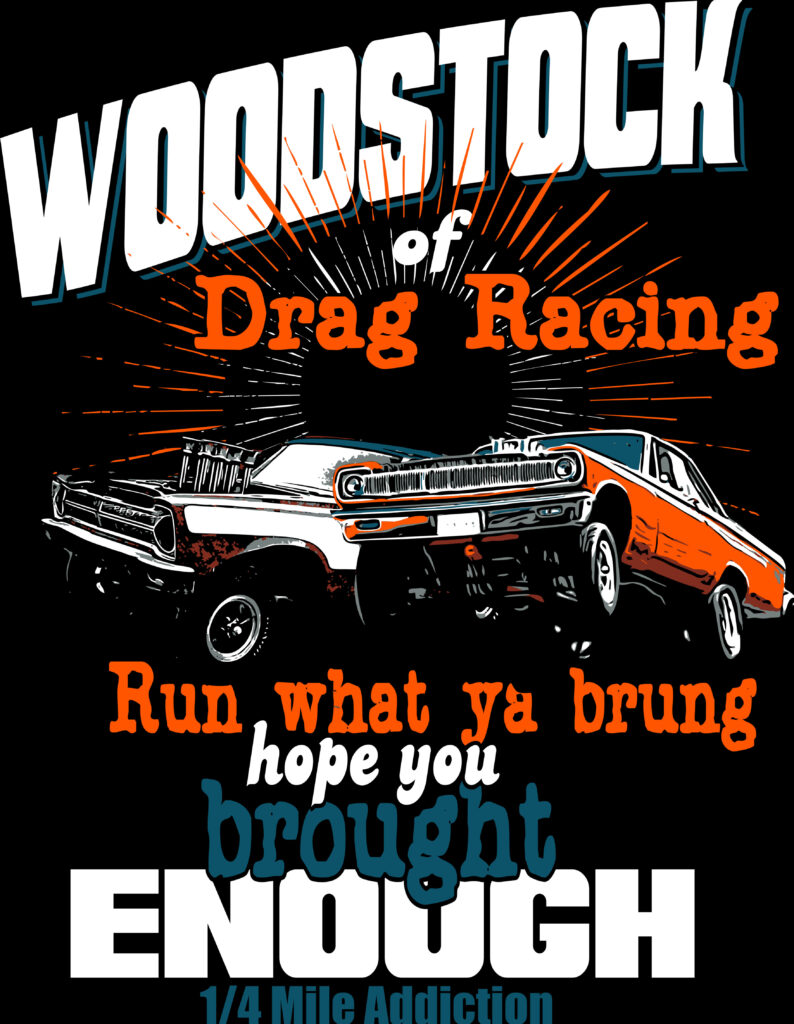 The first NHRA event held in 1965 was known as the Woodstock of drag racing. This was at a time where the crowd would actually stand around the two race cars at the starting line. Then they would literally part to let the cars pass!

Some would stand so close behind the cars, they could actually see the dash controls of the car in action! Talk about close calls. This was the start of many crowd packed events from the mid 60’s until the late 70s.

Here we have a pair of 1965 Dodge and Plymouth hemi cars, complete with fuel injection stacks. The saying run watcha brung meant that when you showed up to race for the day or evening, you had best be sure to bring all that you got.

Meaning your setup had to be the best of the best. It was truly an all or nothing be all and end all racing event. There were practically no rules. You ran what ever fuel you could get your hands on. The tune up was often set on kill for most.

Both suspension and engine tune wise. Be prepared to break some parts.

We have many more hemi t shirts for sale, with new designs currently in the works. Not only do we offer premium fit t shirts we also have

With many more items to choose from. Click on any image to see that particular product or see visit the store front here for our complete design range https://www.quarter-mile-addiction.com/stores/quartermileaddiction.

We invite you to leave a comment or feed back about our products. Also if there’s information you may have found on here that isn’t 100% correct, please let us know. We weren’t around at this marvelous time when the above mentioned events unfolded. We strive to re tell the stories, to keep the legend alive. Perhaps you have your own story to tell. We’d love to hear about it.

More cool drag racing t shirts along with a bit of drag racing history can be found here https://quartermileaddiction.com/2019/05/23/drag-racing-t-shirts-by-quarter-mile-addiction/