They were made of a clear hard plastic, and you would use them as a guide when porting your stock cast iron cylinder heads. They would help prevent you from porting too far into the combustion chamber and into the water jackets. They’d also guide you from grinding too far into the valve guide and valve seat area.

Also,  just as importantly, the templates would help you avoid over doing the porting process, where you would see performance losses instead of gains. This is where things can become a bit tricky. You can very easily make things worse than stock by removing too much material from critical areas. 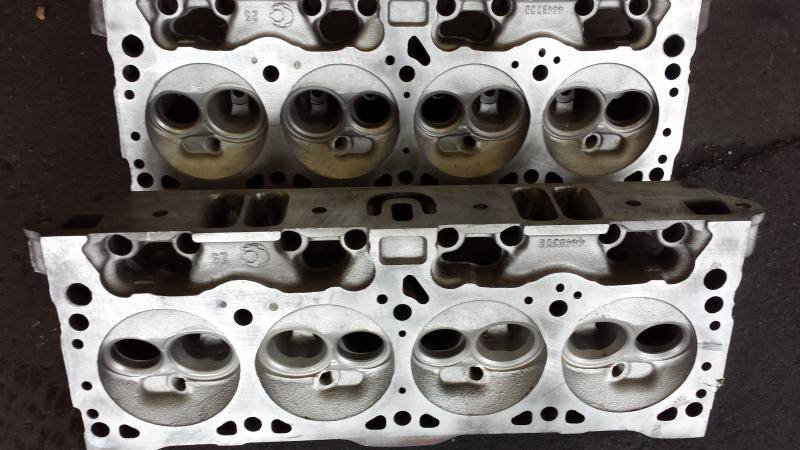 The great thing about the head porting templates is, you can very easily learn to do this yourself at home in your garage. Once you’ve got your hands on an old cracked head or heads, you can begin to practice with the templates as a guide. This is how some of the old pro’s from back in the day started out porting heads. Further more, this can be done without the need for a flow bench.

It is said that you could very well see up to 15% flow gain over the stock swirl port 360 heads. With a little more on the exhaust side. For even further gains, you’d have the valve seat area opened up to accept 2.02 intake valves. Of course this adds a little more to the cost. We’ll discuss more on this very option with your stock cast iron heads very shortly.

I’ll share an absolutely killer article that I highly recommend you read more about very soon. I’ll show you how you can get your Dodge 360 LA cast iron heads to flow as much as 230+ CFM with only .450 inch lift. Essentially this is very nearly the same as stock Edelbrock LA cylinder heads at the same lift. Depending on how much of the head porting you decide to do your self, you could very well achieve this for less than the cost of buying new heads.

Read on, you won’t want to miss this!

Before we begin, this short guide is for anyone that has never ported heads before. It’s an introduction to entry level head porting. There are many, many videos on YouTube showing how this can be done. Unfortunately, I haven’t been able to find any videos with someone using the Mopar templates.

If you’re reading this and you happen to have a set of porting templates, and you’d like to make a video, leave a comment below this article. I’d be more than happy to put your video up on the website here so others can see how it’s done. The next step then is to get your hands on the templates to begin.

Unfortunately Mopar doesn’t make them any more. It is possible to scan the internet for them. You might get lucky with Ebay, or perhaps a Mopar forum like Moparts or Allpar, or even a speed shop may have a set stashed somewhere in a dark corner. Not to worry though. There is a way around this. You can make your own.

If you want to make your own templates to use as a guide to port your own heads, take a look at the PDF file here, Mopar Porting Templates big block and small block cylinder heads then download the file to save for yourself. Then simply print them out. Make sure you print them to scale though. You’ll find all the info you need to print to scale and how to use the templates within the PDF. (The templates will work for the 360 and 340 Swirl Ports Heads. Click on the Mopar Porting Templates link above to read more about the templates and what heads they will work on.)

The next point of reference to is check out this very short article here how to install a performance porting template kit.. This article features the small block Chrysler Magnum head kit. You’d use the LA head kit in the same manner. There’s photo’s of the templates installed, so this should make things a lot clearer, once you begin to dive into the info provided in the PDF. 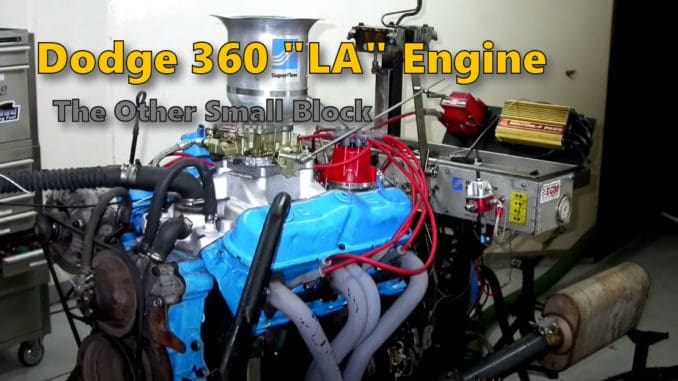 You should be aware that the kits aren’t suitable for all LA cylinder head castings. Nor will they work with aluminum heads. Also note the suitable valve stem and valve sizes. They must only be used on 340 or 360 swirl port cylinder heads. The head casting numbers to be used are as follows:

Allow for 15 to 20 hours to complete the job. It’s best to take your time to be sure that you are as accurate as possible. That way the job will be done correctly. You will see a significant increase of power and performance from your stock engine. Economy may be increased as well. As you improve air flow, you improve fuel/air mixture too. Enabling the fuel to burn more efficiently.

You will want to consider having your heads milled slightly. This is because as you open up the combustion chambers in the heads, this increases the port volume. This actually lowers the overall compression ratio of your engine. This will vary. It’s possible to see compression drop by half to a whole compression point or more. From 9:1 to 8:1 compression for example.

It is recommended to discuss further your plans with your machine shop before making a start. Just so you know what to expect. By milling the heads to bring up, or to at least restore the stock compression ratio, this is a far cheaper and easier solution, over buying and installing higher comp pistons.

You will need to consider what fuel rating or octane of fuel you normally run, or plan to run with your engine as well. Bumping up the compression slightly will increase power and performance too. If you don’t plan on a full rebuild of your engine, this option will give you the best bang for your buck.

The next section of this article and references to cylinder head porting secrets, for your Dodge 360 LA engine, will reveal more information about combustion chamber volume and compression ratios. You’ll also learn how to increase air flow through the cylinder head with low valve lift. Leading to increased low end power and performance for a really hot street engine.

So for even more cylinder head porting secrets for your LA Dodge 360 engine, the article I’m going to recommend you take a look at is called “Double Take 360”. This is a four part series written by the legendary Steve Dulcich of Roadkill Garage and Engine Masters fame.

Believe it or not what you are about to learn can be done on a very small budget. The machining involved does need to be performed by a machinist. The cost would still be less than the cost of new heads. Even today. In 2020. The articles can be found in the Dec 1999 Mopar Muscle Magazine. The next 3 installments are from the Jan to March 2000 editions.

As you may well know Mopar Muscle magazine no longer exists. You can buy back issues from E-bay or from the Hot Rod network which is now Motor Trend Group. Or you can view the articles online. Unfortunately I cannot find the first installment online. The first article is about building up the short block. If you really want the details of the short block build up, leave a comment in the comment box below.

At this time we’re more focused on the head porting side of things. I personally have all four editions of Mopar Muscle magazine covering the complete setup. If you want to purchase the editions of the magazines for your collection, here’s what you might want to keep an eye out for. I should add that even though the articles where written 20 years ago, the information is still very valid and valuable today.

Here’s next edition along with the cylinder head porting secrets that you need to make your smog head 360 flow much better than the famous 340 ‘X’ head casting. You can read all about porting the intake side of the heads here here https://www.hotrod.com/articles/mopp-0001-360-engine-head-porting/ 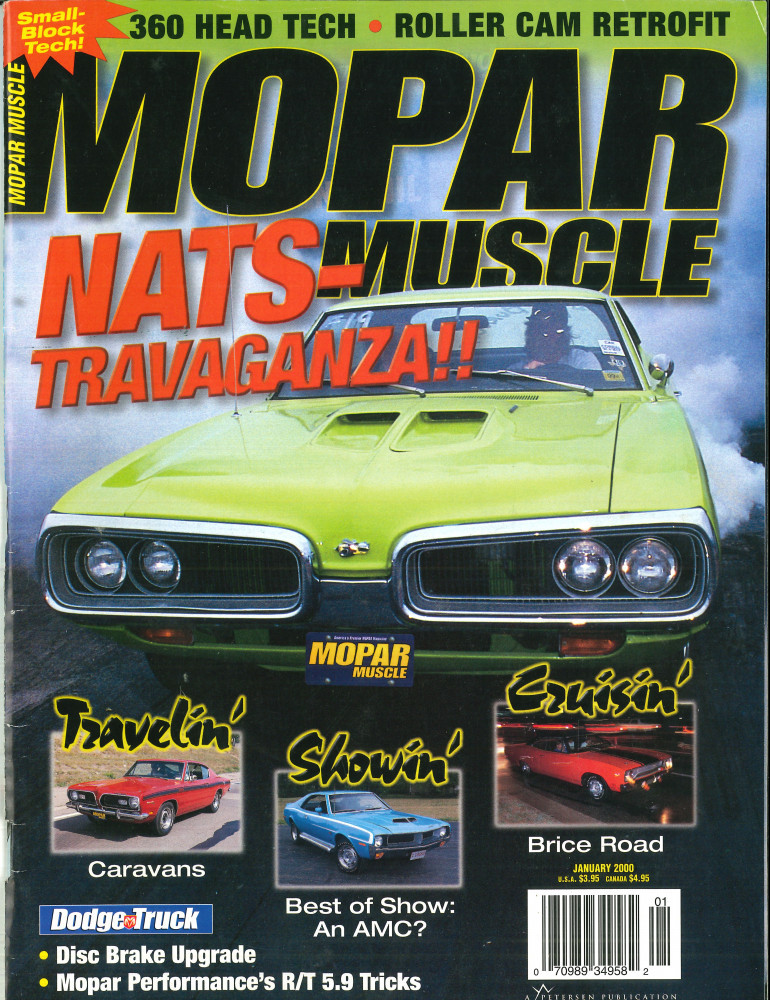 Part three covers porting the exhaust side of the heads. You can read the article here https://www.hotrod.com/articles/mopp-0002-porting-exhaust-smog-heads/ 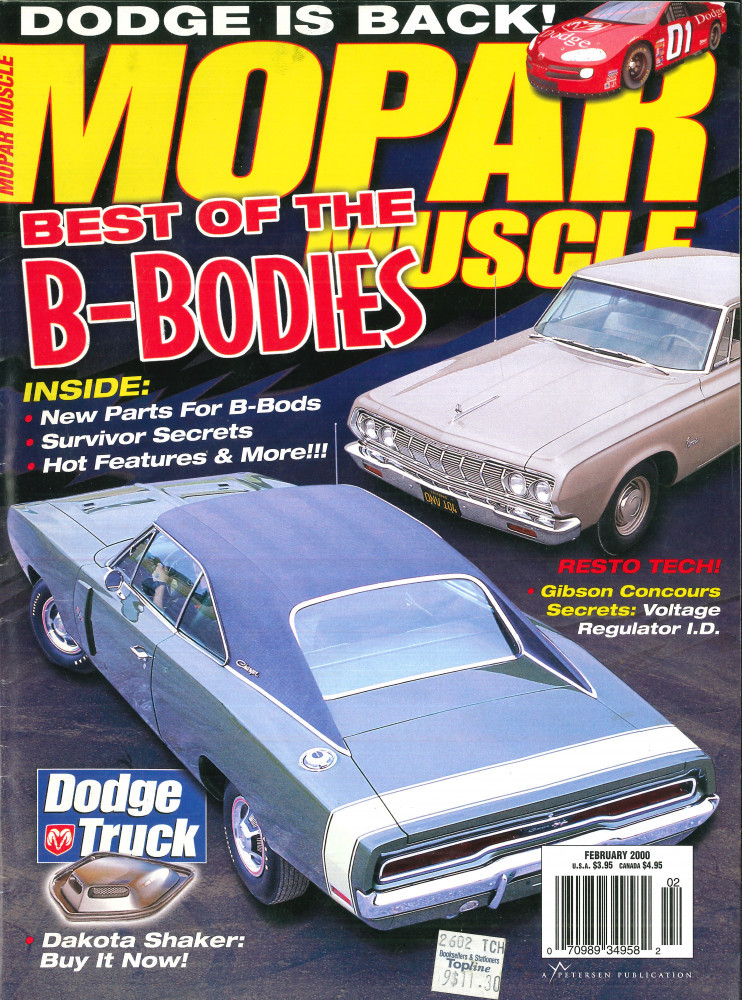 Part four is about putting the engine together and running it up on the dyno. Do you think it’s possible to make more power than the 360/380HP crate engine? Find out more here https://www.hotrod.com/articles/mopp-0003-360-engine-build-top-end-part-4/. Here’s what the edition looks like to keep an eye out for. 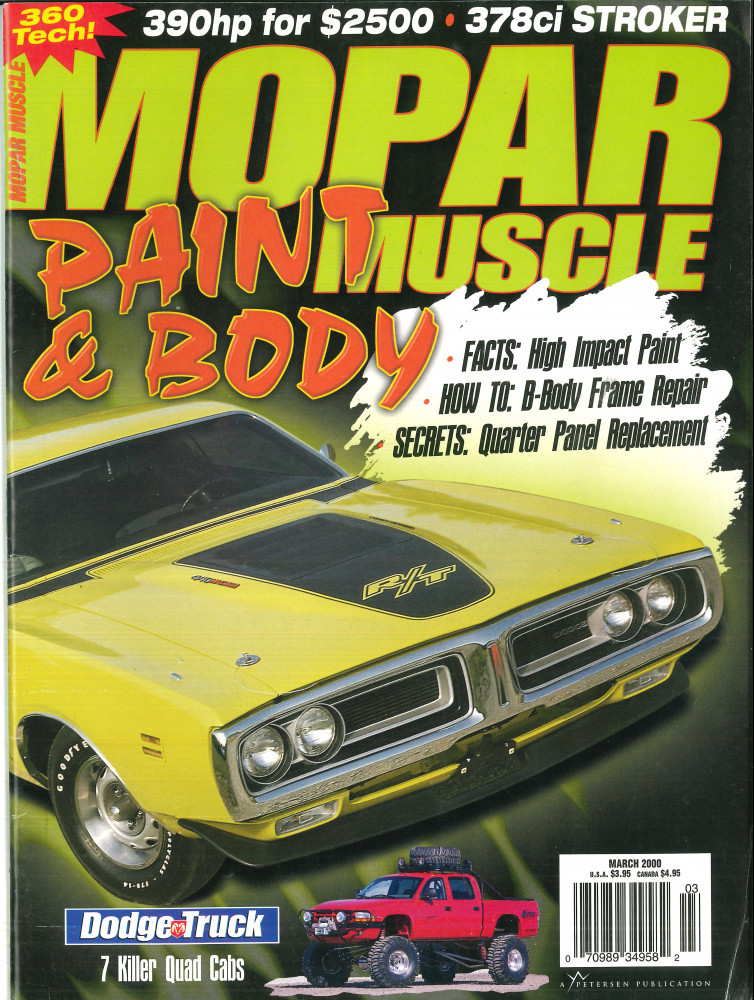 Ok so the headline gave away that answer lol! The last article which is a follow up a few months later reveals how to achieve 400 plus horsepower with a solid cam setup. You can read more about it here https://www.hotrod.com/articles/mopp-0007-chrysler-360-engine/.

So you now have access to some pure Mopar gold on a budget. If you’re keen to learn and want to have go, you now know what can actually be done on a budget. Just by simply making your own cylinder head porting templates and performing a basic port job from there will net you some very noticeable gains.

Of course I’m sure you can see how easily things can begin to snowball from there. Once you have your templates on hand and have consulted a machinist about your plans and goals, you will need a few basic tools to begin the porting process.

You can find the tools you need right here on Amazon. As an Amazon affiliate I earn from qualifying purchases. 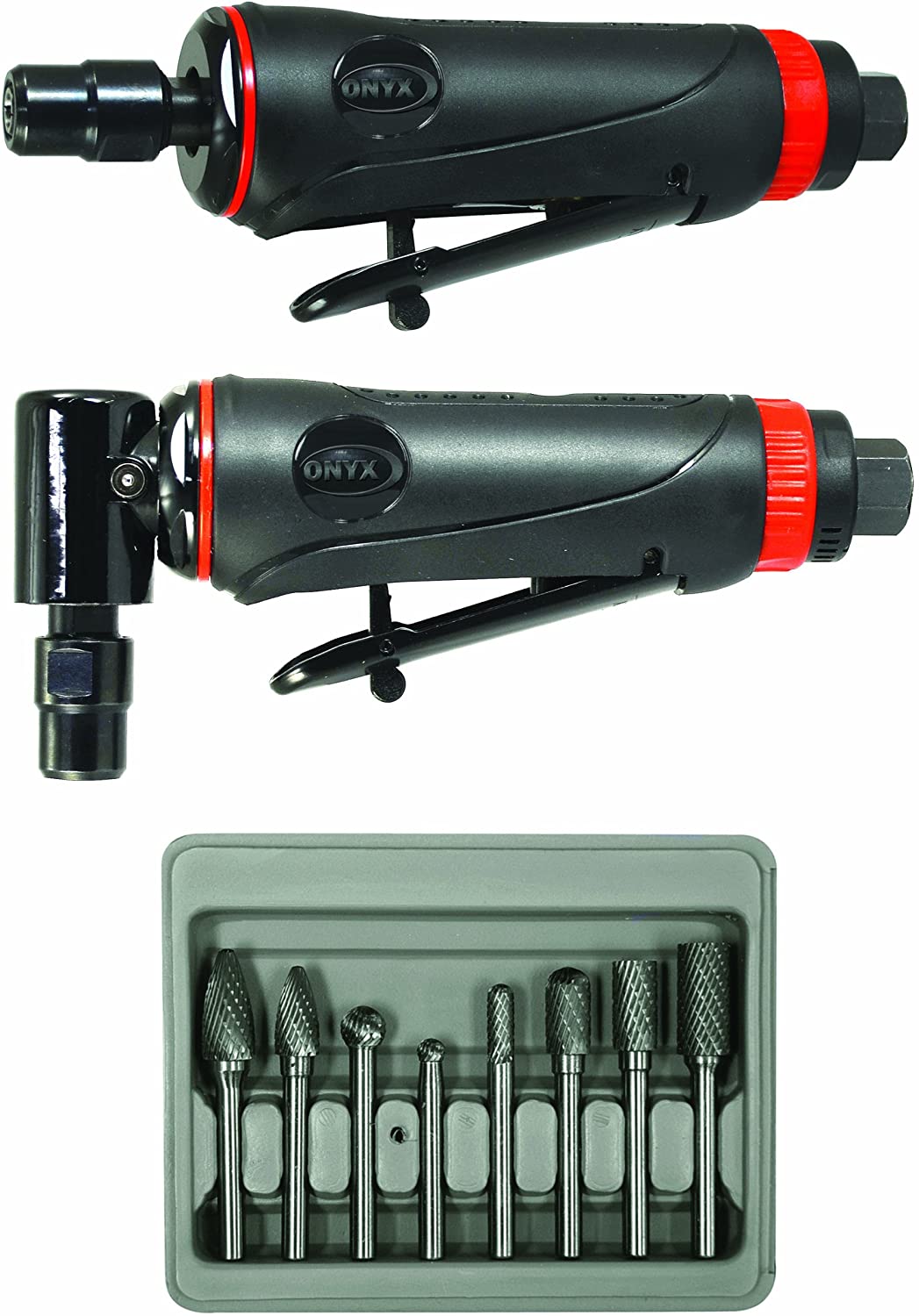 The alternative to getting the most out of your stock Dodge 360 engine cylinder head castings is to opt for a new set from Edelbrock. As far as new heads go, they will give you the best value for money. You can learn more about the small block Mopar LA cylinder heads from Edelbrock here https://quartermileaddiction.com/best-small-block-mopar-heads-on-a-budget-build-review/