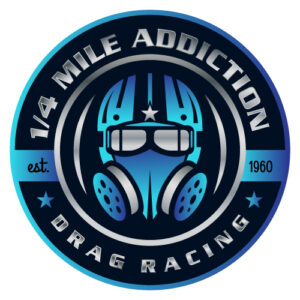 nostalgia drag racing. Drag racing from the 1960’s & 70’s era is more than likely bigger today in modern times, than it was back then.
Perhaps there isn’t quite the spectator attendance today as there was in the mid 1960’s & 1970’s across the country each and every weekend. Having said that, there is definitely more Stock, Super Stock, Pro Stock and Heads Up or Match Racing cars in attendance than ever before.

As the popularity of the sport continues to grow, more nostalgia drag racing cars are being built every year too. To represent or bring back the real cars that the factories made, that were raced on Sunday and sold to the public on Monday, this has been greatly missed today in modern drag racing.

One of the first really popular drag racing classes in the mid 1960’s was the Super Stock drag racing class. This class really was about buying a car off the showroom floor, (usually a big block or big cubic inch v8 of 400 cubes or more), and installing a hot or wilder Racer Brown or Iskenderian camshaft for better fuel/air flow. 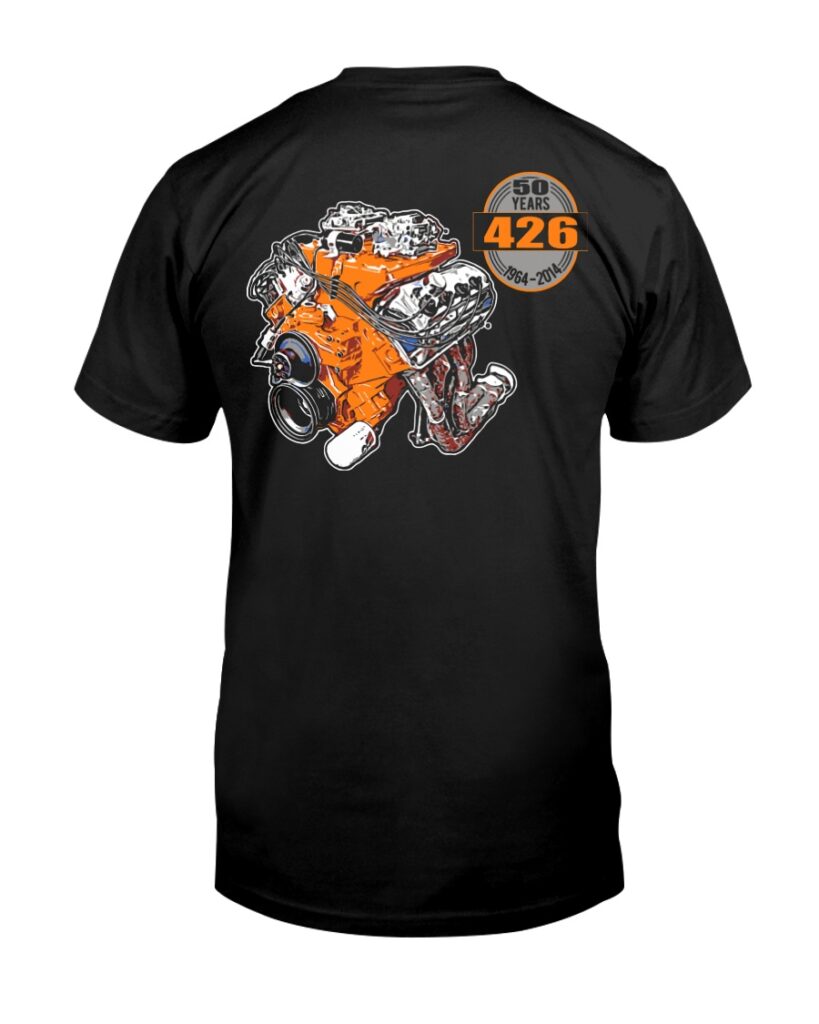 This usually resulted in the rear end of the car to sit way up higher than stock and gave the car a real mean looking stance or rake, and looked really cool. The car just looked fast, even when it was sitting still!

We strive to capture the era of days gone by, with our line of Nostalgia Super Stock drag racing t shirts.

Click on any image to view each design in detail. 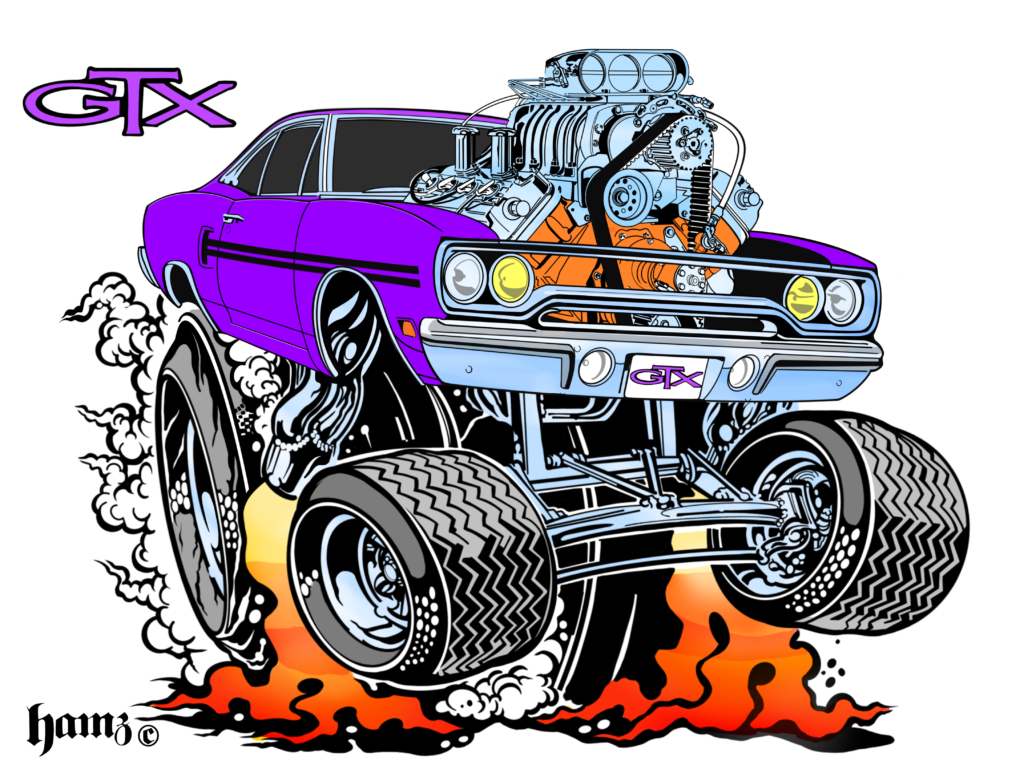 By the time 1970 rolled around, the popularity of drag racing across America, as well as around the world, really had exploded. It wasn’t just the racers that had acquired a Quarter Mile Addiction, it was the drag racing fans too. Crowd attendance had grown year on year, and so did the engineering prowess and excitement of the Pro Stock drag racing class.

With even wider wheels and tires out back and skinny (front runner) tires of just 4.5 inches wide in the front, the cars started to look like the popular front engine’d or sling shot dragsters, accept, the cars still had a stock or factory looking body.

Also notably, were the big air scoops on the hood. The goal was to try to ram as much air as possible into the engine to increase horsepower. Some other tricks were applied as such as a slightly laid back front windshield, to try to improve aerodynamics. Only the trained eye could spot such a sly modification.

This in turn saw tube chassis being integrated into the cars as well. The cars sat lower to the ground as the decade progressed, and looked very similar to the funny cars of the 1970’s although not as stretched out or long looking. Many hidden engine tricks or mods were also tried and tested. 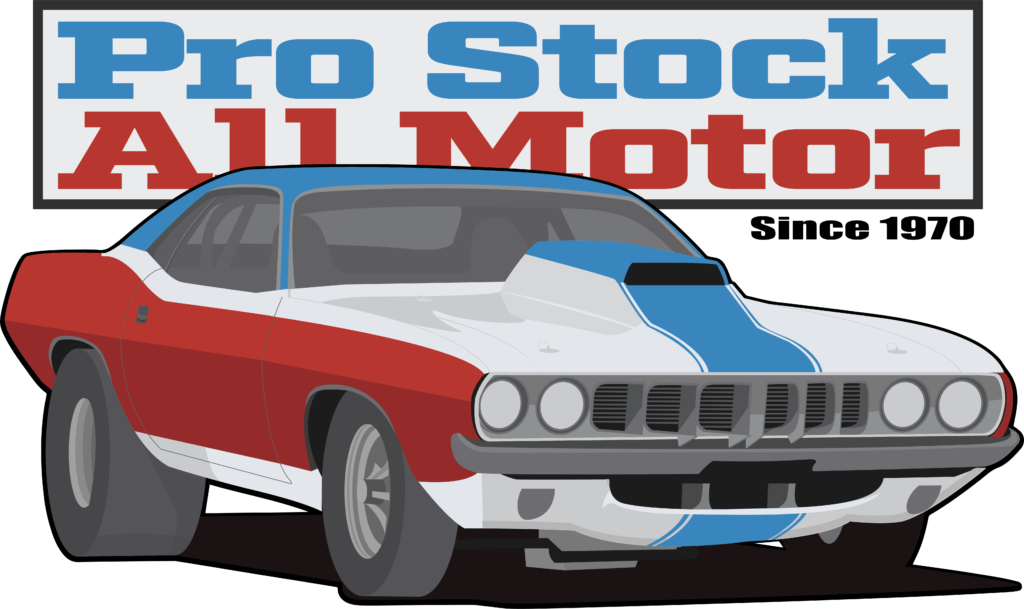 Towards the mid end of the decade, some factory backed cars had weight restrictions and engine limitations put upon them to try to ‘even’ the field.

We have managed to capture the look and indeed advertising slogans of the 1970’s drag racing era, on our drag racing t shirts too. 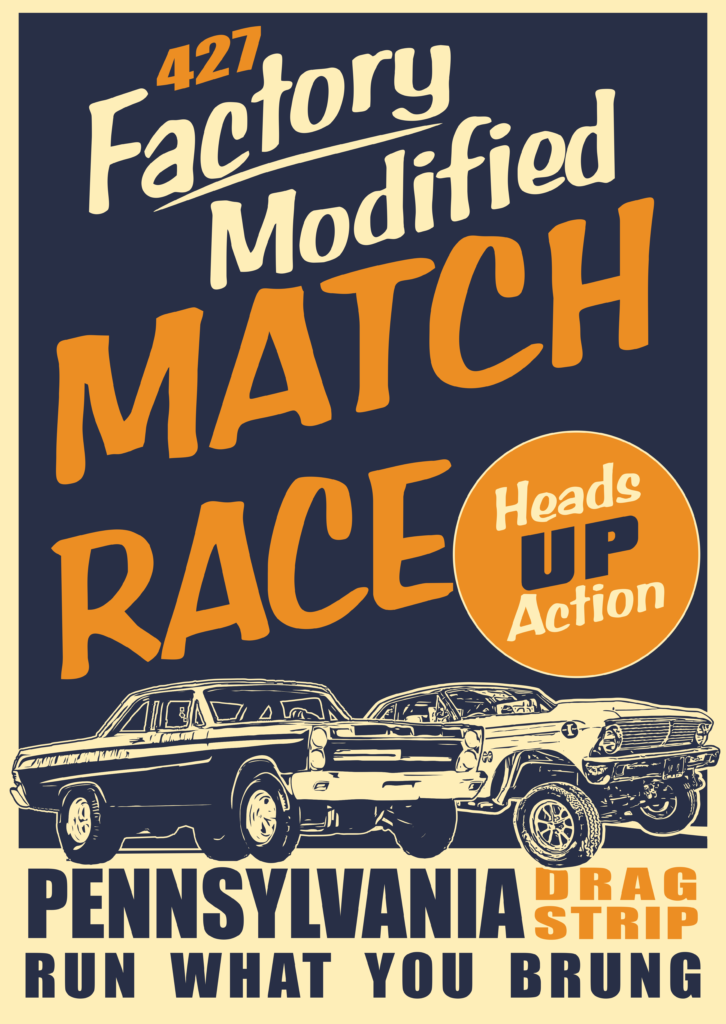 From the early 1960’s it was not uncommon for some drag racing spectators or fans to casually wager bets among themselves, against their favorite drivers and cars. Whether it was a gentlemen’s hand shake, some pocket change, (sometimes a lot more) or simply a hot dog and soda, being the prize for picking the winner, this did not go unnoticed by savvy track owners and promoters.

This in turn lead to the idea of track owners/promoters offering a healthy winner takes all cash prize pool, to many well known drag racers across the country. This in turn would bring in even bigger crowds each weekend, of putting ‘bums in seats’ as the catch phrase became known for.

So more and more big name drag racers were drawn to the tracks with a big cash prize pool payout to be won. Usually in a best of 3 race event. This is often how 99% of drag racers of the day made a living. To not only fund the cost of travel, racing and parts, but for some it put food on the table.

Thus heads up match bash drag racing was born. It was a case of ‘run watcha brung’. This wasn’t sanctioned or backed by any drag racing body or regulator, so there were practically no rules.

Racers simply turned up with the best of what they had on the day or night, put on a bit of a show for the crowd, won the event, and often continued to travel to another drag racing sanctioned event the next day, or even that same night.

This has now become arguably the most popular type of drag racing today, as seen on some TV shows over the last 10 years. We have put together a handful of heads up match bash drag racing t shirts we are sure you’ll love.

We’ve saved the very best for last. Who can ever forget the old hot rod Gasser’s from the 1950’s & 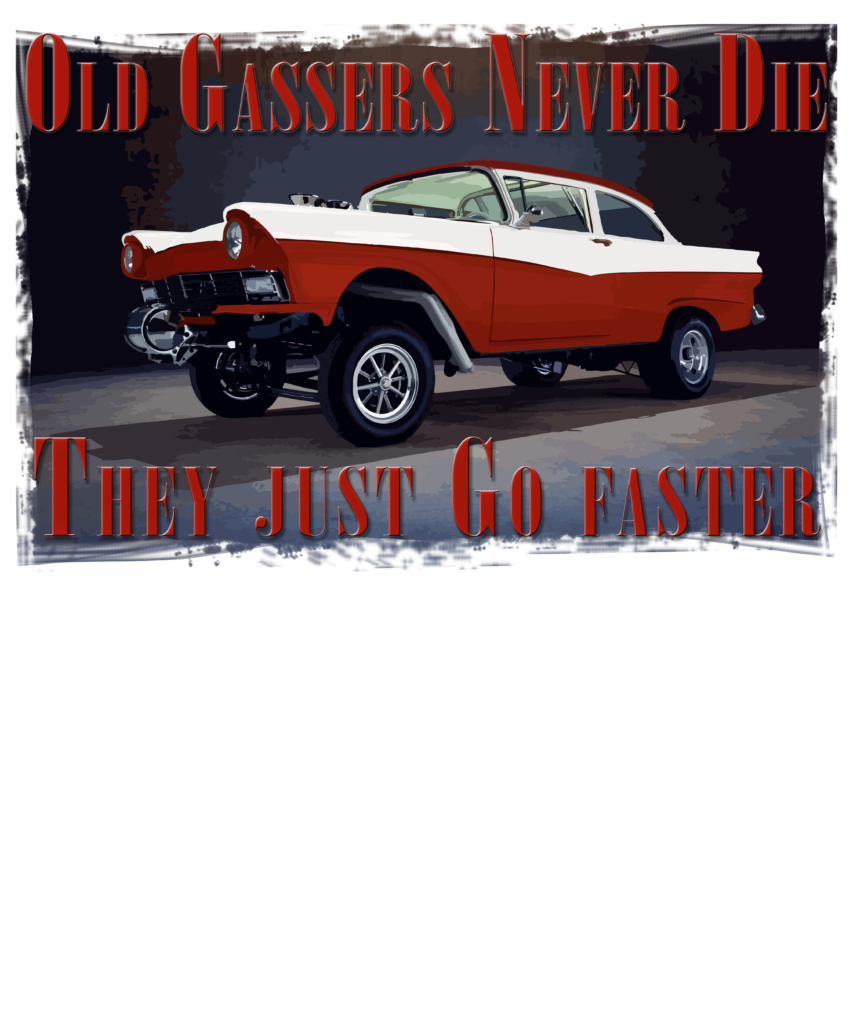 With their engines positioned high in the engine bay for better weight transfer/traction, straight front axle with leaf spring suspensions, nose up, back end down, and often wildly built drag racing engines that ran on methanol or hydra-zine if you were really game. They were really hairy rides to say the least.

Then of course those really wild and crazy slingshot dragsters. Often wheel standing while smoking the rear tires at the same time, right off the starting line! All the while making such a noise, you could feel the sound vibrating in your body and rattling your clothes, and ear drums too if you weren’t too careful.

This really was, the greatest, wildest, craziest, most exciting and fun times in motor sport history. (Arguably, we think so anyway). 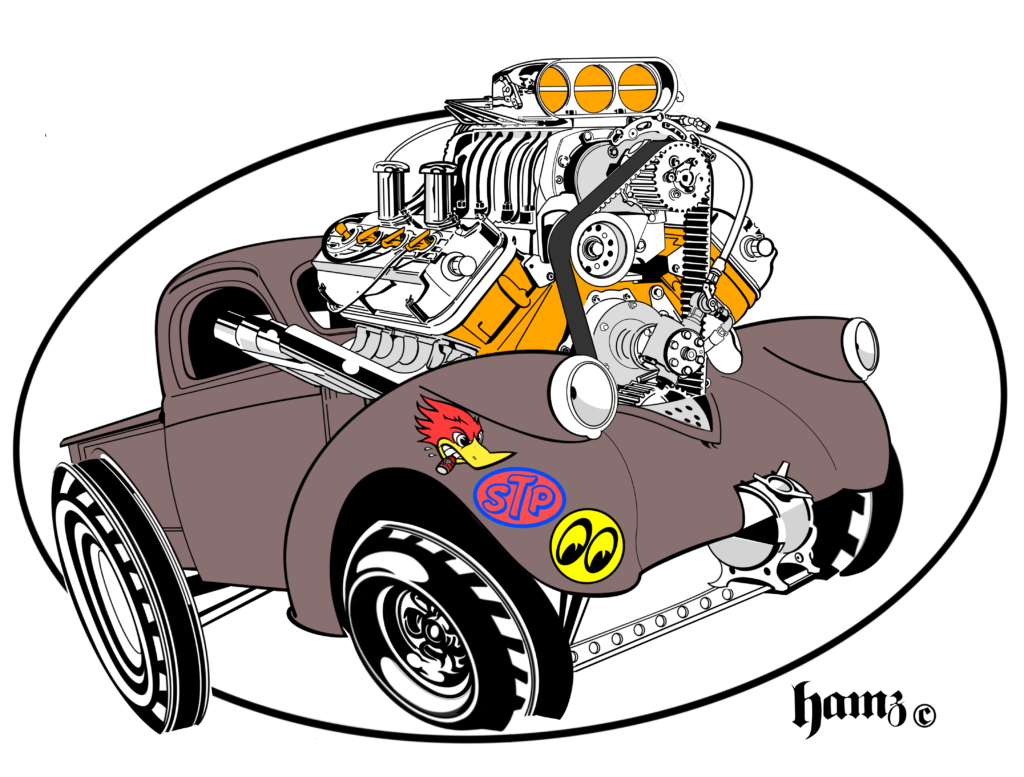 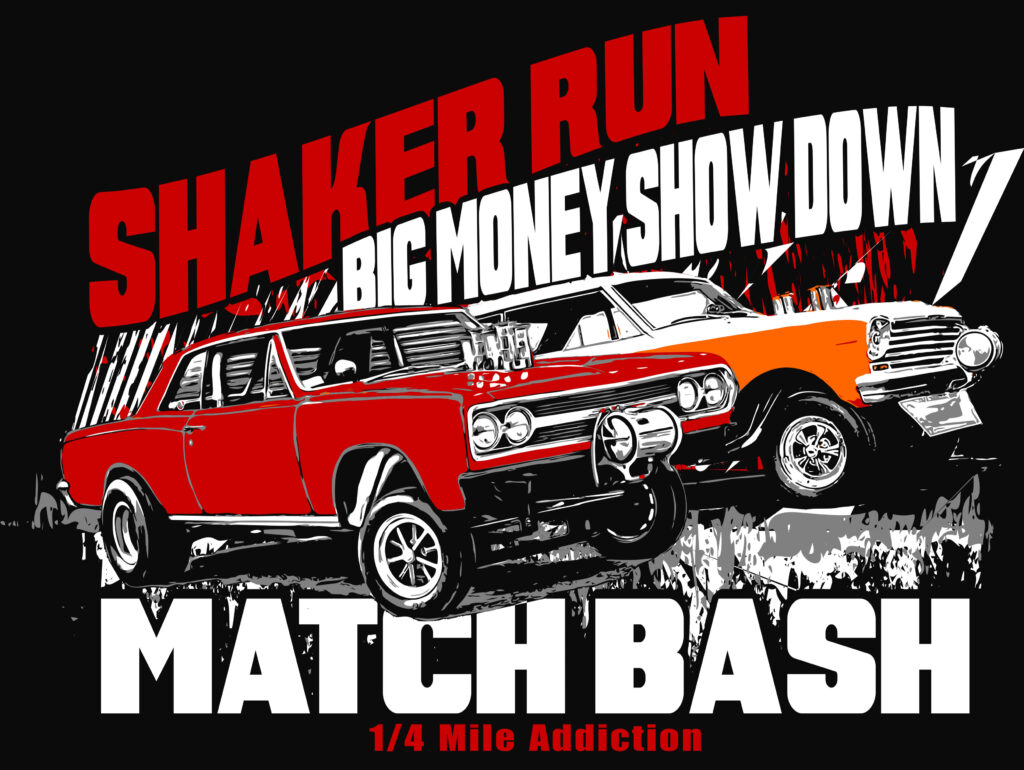 We have begun to capture the true essence of American car culture, life and history with our drag racing t shirts. From popular crowd drawing, drag racing classes printed on each shirt. To the many house hold drag racing slogans (also included on our drag racing t shirts). Which were used to advertise the big events in local news papers, radio, and TV adverts of the day. We’re sure you’ll agree. Long Live Nostalgia Drag Racing.

Click on any image for more details or visit the store front here https://www.quarter-mile-addiction.com/stores/quartermileaddiction for free shipping options.

What do you think of our designs so far? Leave a comment in the comment box below.

You’ll find more drag racing t shirt designs and drag racing history, on this website. Click on one of the links below for your viewing pleasure.