What is a supercharger kit? A supercharger kit is a combination of supercharger parts (kit), that are fitted to an internal combustion engine. By doing so, this increases the horsepower of the engine. Typically, an increase in horsepower and performance by as much as 30 to 70+% can be seen. The engines performance is instantly increased, once the engine is suitably tuned. As a result, fuel economy and engine efficiency can be increased too. 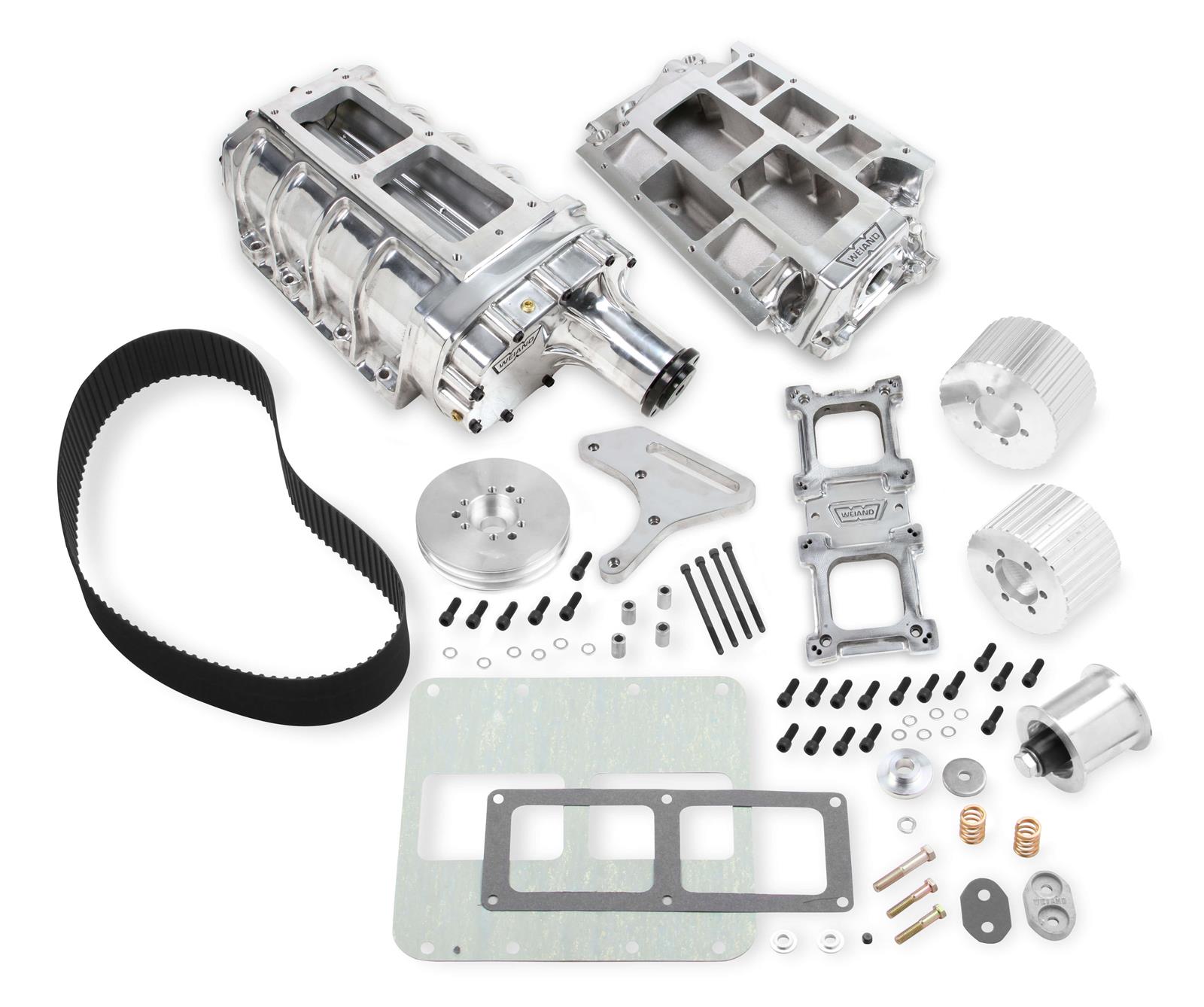 The best way to look at it is, a supercharger is basically a large air pump. If the goal is to increase the horsepower of an internal combustion engine, then that engine needs more air. When we increase the air flow or the volume of air, into the engine, this allows for more fuel to be added.

With more air and fuel entering the combustion chamber/cylinder area, when the piston compresses the larger volume of air/fuel mix, and when the spark plug ignites that mix, a much larger explosion occurs. The larger explosion increases the pressure on top of the piston, with at least 30% more force than without the supercharger. Pushing the piston back down the cylinder with greater force. In a nut shell, this is how more horsepower is made with a supercharger.

The throttle responsiveness from a supercharger is instant. Meaning there is no lag or delay before engine boost is made. This is because the supercharger is mechanically driven.

How Does A Supercharger Make Boost?

The supercharger is mechanically driven. This is via a belt that is fitted to the crankshaft pulley of the engine and the supercharger pulley. By changing pulley ratios between the two points where the belt is fitted, air flow can be increased into the engine. Along with more fuel of course. This is commonly known as boost.

The amount of performance and horsepower that the engine can be increased by depends on a few more factors as well. If you’re fitting a supercharger kit onto a stock engine, then you are limited to how much boost you can safely make. As factory engine compression ratios are near optimum for pump gas on most modern engines. Typically, 5 to 6 pounds of boost is ‘safe’ to use with a stock engine. As long as there is enough fuel supply and the ignition timing is adjusted or tuned for boost.

Water to air intercoolers can be used to cool the intake charge or air/fuel before entering the engine. By cooling the intake charge, air density is increased along with volumetric efficiency. This is another way air flow can be increased into the engine to make more power.. For more info about how this works see the link here https://www.vestas-aircoil.com/vestas-aircoil/charge-air-cooler/explained

The roots type supercharger is the most recognisable supercharger of them all. This supercharger was commonly found on heavy diesel engines. From locomotives to larger earth moving equipment. It was quite common to see two roots superchargers, used inline, on one engine.

You’d have two v8 diesel engine blocks bolted together back to back. Sharing one long crankshaft. So effectively a v16 engine. One supercharger faced forward and the other facing backwards. They were mechanically driven with steel gears, not belts like you see used on drag cars and hotrods today.

There are a lot of different types of roots superchargers found on cars dating back to 1921. They were found on Mercedes vehicles. Known as the Kompressor model. They were the first production series produced roots blowers. They fitted under the hood as well. The diesel engine roots blowers just described, are more commonly used on hotrods, muscle cars and drag cars. This is the supercharger kit that I’m referring to. They are commonly known as a 6/71 or 8/71 supercharger.

A typical roots supercharger kit comes with the following parts and accessories:

The twin screw supercharger kit is a more compact and versatile kit. Most kits will fit under the stock hood of most modern vehicles. There are many different brands including, Whipple, Keene Bell and Lysholm to name a few. Depending on the brand chosen, the accessories as such as alternator, power steering pump and air conditioning pump will stay in the stock or factory location.

Depending on the kit or brand chosen a typical twin screw supercharger kit includes:

Note: depending on brand/kit chosen some additional parts may be necessary.

A centrifugal supercharger is basically a mechanically driven turbocharger. They infact look like a turbo but are mounted on the front of the engine with brackets. There is a large pulley fitted the the back of the centrifugal supercharger. This is driven off the crank pulley off the engine, in the same way the roots and twin screw systems work. As mentioned they are mounted differently. For more info on how they work see the link here https://www.procharger.com/centrifugal-supercharger

In many applications a heat exchanger is not required. The air outlet of the centrifugal supercharger is directly connected to the air intake or carburettor on the engine. For carburetted vehicles a blo-thru style carburettor is required. Depending on the kit and brand chosen, some kits come with everything you need to install and run on a late model vehicle. Some brands like Vortech for example meet all 50 state emissions requirements. This makes installing a supercharger kit on a daily driver more appealing to just about everyone. 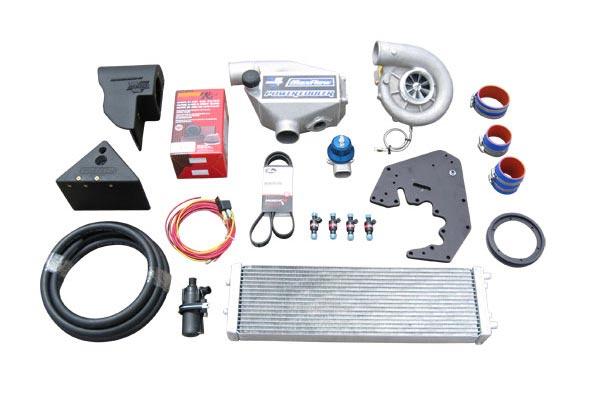 That concludes my review on what a supercharger kit is. We offer a wide range of supercharger kits of various types, for all kinds of vehicles and applications. From daily street use, drag racing, off road and heavy towing. For more information on where to find a supercharger kit to suit your needs, visit the link here https://quartermileaddiction.com/supercharger-kit-for-dodge-ford-chev-bolt-on-more-power/

If you have any questions or want to leave a comment you can do so by entering your question in the comment box below.